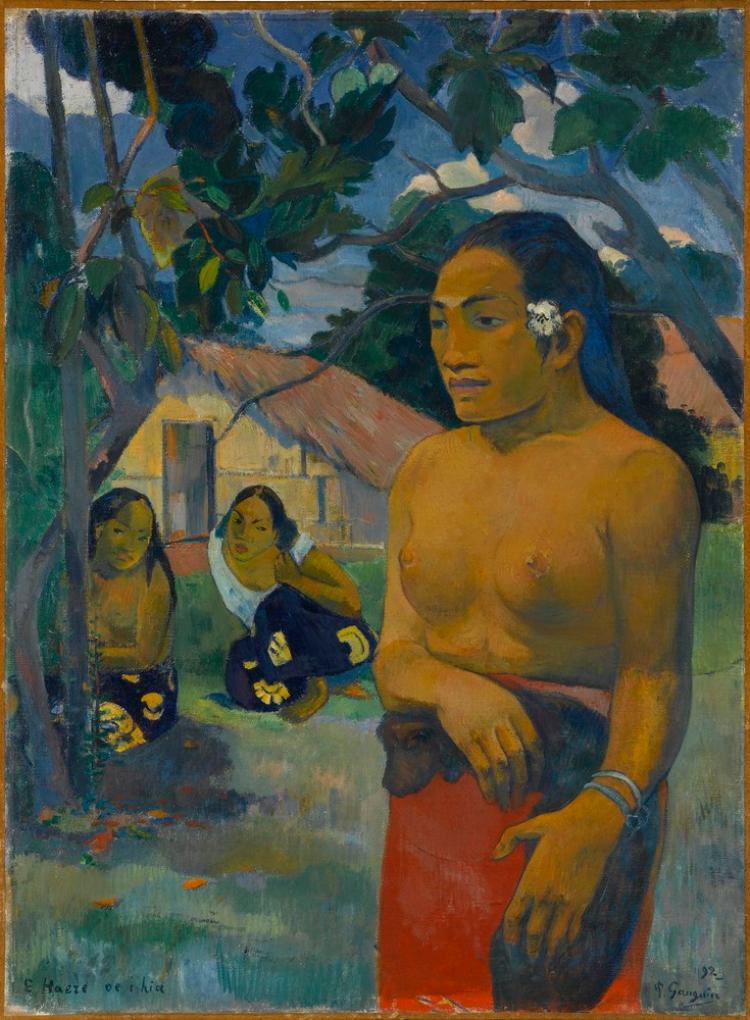 Paul Gauguin
E Haere oe i hia (Where Are You Going?), 1892
10
CC0
Paul Gauguin (1848-1903)
E Haere oe i hia (Where Are You Going?), 1892
Öl on Leinwand; Höhe-Bildträger: 92 cm; Breite-Bildträger: 69 cm; Höhe-Rahmen Außenmaß: 117,7 cm; Breite-Rahmen Außenmaß: 94 cm; Tiefe-Rahmen Außenmaß: 6,5 cm;
The painting reflects the immediate impressions Gauguin gained during his first journey to the South Seas. Yet it is less a true-to-life depiction than expression of the painter's cautious attempt to approach and to comprehend an unfamiliar culture from the vantage point of his own very different world. The young wolf held by the woman in the foreground alludes to an episode in Maori mythology. The woman represents Oviri, the goddess of death, who is watched in fearful anticipation by the two young girls in the background. At the same time, the blossom in Oviri's hair and the tropical vegetation that surrounds her, with its suggestion of a garden of paradise, are indications to Hina, the Maori goddess of fertility. The fundamental contradiction between life and death appears resolved and reconciled in this bewildering, exotic world.
Categories
Paul Gauguin Leinwand Öl 19. Jahrhundert
We want to provide the most important information and services for you in the best-possible way. To do this, we need your consent to use the ‘Matomo’ web analysis tool to create and carry out an pseudonymous evaluation of your visit for statistical purposes. Your consent is valid for 12 months.
accept
decline
configuration